Sysco asked Osis to produce a series of banner animations for their website. Due to budget constraints, and the requirement for several animations it was agreed that stock photography rather than video or 3D was used as the basis for the animations.

Using After Effects to add visual effects we built a series of visually effective and very cost effective banner animations to complement the client's website. The animations loop seamlessly on the page. This is the first one in the series and illustrates the Electromagnetic Field theme.

Back to Recent Work

If you are looking for a professional & affordable presentation or animation to promote your business or idea - use the form and we'll get right back... or call 07966 324533 and ask for Shannon

We were asked to create a marketing presentation to run on an iPad. This was to be used by the Head of Marketing in informal situations, and needed to be tailored to various requirements. The presentation needed to have a custom menu structure allowing sections to be skipped or shown at will, it needed to […]

Croft Construction were looking for a presentation - and ended up getting a website redesign as well... Their original presentation was an old PDF that lacked sparkle and excitement, so Paul got in touch to see if we could do anything... We suggested an online presentation incorporating animation and basic interactivity, allowing the information to […]

Used at a conference this animation was commissioned for display as a loop on a plasma screen. Using a static image as the basis of the animation, we then recreated plant elements in 3D and composited them over the background, to which we also added some subtle animation. The result looked very convincing with the […]

Get in touch or request a quote... 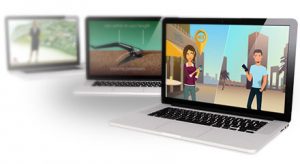